VANCOUVER, Washington — On Tuesday afternoon a Vancouver man killed a young woman at a PeaceHealth medical building after he had earlier confronted another employee over an appointment time. He took her young life and all that she would ever know, apparently in an instant of anger and misplaced retribution.

58-year-old Douglas Jeffrey Moore arrived between 12:20 p.m. and 12:50 p.m. Dec. 22 at the Medical Center Physician’s Building for a post-operative appointment.

Moore was a couple hours early then became upset when he was told he could not be seen until his appointment time. He then left.

Minutes later, Moore returned to the building and shot and killed 20-year-old Liliya Zagariya, who was working as a concierge in the lobby. Then he turned his gun on himself.

One can only imagine that Moore worked himself into a frenzy and killed the most innocent person he could find at the medical center, just a girl really and ended her life in a sudden fit of rage. One can also imagine that Moore then suddenly and immediately came to grip with his evil and unspeakable deed and perhaps could not bear the sight of the girl dying from his own hand.

Of course, we don't know exactly what Moore thought, how his anger worked itself to commit a senseless murder, to aim a gun at an innocent girl and shoot her to death, a young woman beginning her life, helping others, loved by family and friends, and co-workers. Moore took everything from her she would ever know, leaving friends and family with intolerable pain and unanswered questions.

Her older brother, Daniel Zagariya, said Liliya was a bright light in their family and will be remembered as driven and compassionate.

"My family and I will be missing her very dearly," he told FOX 12. "She brought our whole family together. She would always, almost on a daily basis, check in with everybody. She'd always want to talk to us to see how everybody was doing." 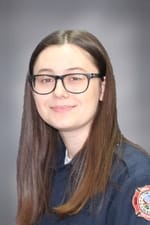 Lt. Bryan Ditterick, a public information officer with Cowlitz 2 Fire and Rescue, said Zagariya had been with the department since May and obtained her EMT license in January.

“She was on our shift quite a bit,” Ditterick said. “She was a vibrant young lady; she was well-liked by the firefighters. She was always eager to help and would ask questions when we were on medical calls.”

Liliya died just before she was about to embark on a new adventure. In January, she was set to start Cowlitz 2’s fire academy. Her fire colleagues said her future was bright.

“She just had that impact,” Ditterick said. “You know she was going to be successful in fire service, it was very competitive.”

Zagariya’s employer, PeaceHealth, made this statement.

“Our thoughts, support and prayers go out to her family. All of us grieve with them,” PeaceHealth said, The Columbian reported.

“We are partnering with the Vancouver Police Department in this active investigation.”

Liliya had been volunteering as an EMT for Cowlitz 2 Fire and Rescue in Kelso.

“She was a vibrant young lady; she was well-liked by the firefighters,” Lt. Bryan Ditterick told the outlet.

“She was always eager to help and would ask questions when we were on medical calls.”

Fire Chief David Lafave said Zagariya had been planning to attend their fire academy in two weeks in order to become a paramedic.

“She would definitely fit in the fire service when she did ride along with us, and in the future, I think she had a bright future ahead as a paramedic or if she wanted to stay an EMT,” LaFave told the news station.

Sherri McMillan has known the family for years and said they're loved by many in the community. She described Lily as sweet, humble and kind.

"She was just a serving, hard-working, giving young woman that loved her family and was very close with her mom and dad, best friends and her sisters," McMillan said. "It's really horrific. It's devastating."

"She was volunteering and wanted to become a paramedic," McMillan said. "She's someone that is just a gem -- like an angel; a sweet, sweet person."

Liliya, "Lilly," as family and friends call her, worked as a concierge for PeaceHealth in Vancouver and was working the front desk of a building near the hospital on Tuesday.

"We're still asking why," Ditterick said. "She was part of our family. She was going to be in our fire academy in January, in a couple weeks, and she was always helpful on calls. A brand new EMT and she was learning, she was vibrant, she always had a smile on her face."

Liliya was an amazing and wonderful daughter, sister, and friend. She lit up the room with her presence and always had a smile on her face. Her death was so sudden and she was taken away from us so quickly it is hard to grasp and comprehend all this at the moment. Though it is hard, we count it all as joy for we know that Liliya is with Jesus. If it is in your heart to donate for the funeral expenses our family would dearly appreciate it. Please keep us in your prayers.