In his Portland, Oregon, home, Austin Meyers stands in front of his gun safe and explains how he stores his ammo, his pistols and his rifle.

He puts a cable lock on his matte Glock handgun, about to demonstrate how fast he could unlock it and load a magazine if he had to in an emergency.

The cable lock is essentially a metal cable with both ends connected to a padlock forming a secure loop. One side of the cable goes in through the chamber, down the magazine well and then loops back into the locking mechanism. With the cable lock in place, a magazine cannot be loaded into the gun and the gun can't fire when the cable lock is on.

Meyers locks his gun, puts a magazine a few feet away and stashes the keys in a safe place. For security reasons, Meyers did not want to disclose where he keeps his key.

But that could change.

The Oregon state legislature has introduced two different bills requiring gun owners to lock their firearms when not in use. If the bill is passed, gun owners in Oregon will have to think about this scenario if they haven't already.

Meyers walks through what he would do if someone broke into his house.

"So if you hear a window break first get your keys," Meyers said, reaching for the keys he hid moments before. "Get the gun from your your nightstand. Get the key into the lock."

He struggled for a moment to get the key in the lock the right way.

"Open the lock up, pull that out. Get a mag in and then you're good to go," said Meyers.

In all, for Meyers, who's been a competitive shooter for five years, it takes 16 seconds.

And while that might not be fast enough for some people, Meyers thinks that's plenty of time. He said you'd probably hear someone breaking in before you had to use your firearm.

"I don't think that it's extreme at all," he said. "It is pretty common sense you know, if you're not using it — keep it locked up."

She and State Sen. James Manning, D-Eugene, are sponsoring one bill: the Cindy Yuille and Steven Forsyth Act, named for the two victims killed in the 2012 Clackamas Town Center shooting.

Oregon Gov. Kate Brown has also introduced a bill that would create a new crime called "endangering a minor" punishable by 364 days in prison and a $6,250 fine.

"It takes kind of a public health approach," explained Smith Warner. "You create an expectation, you do a broad public education campaign about it and you have that become the default activity."

She said no one is going to be busting down doors to check gun safes.

But if something happens, say a child gets a hold of your gun, or a stolen gun is used to commit a crime then, she said, it will be a violation.

The new law would require all gun owners to secure their firearms when not in use. That means locking them up and keeping them out of the hands of people who are prohibited from owning guns like minors or felons. It also requires gun owners to report a stolen gun within 24 hours or face liability for any damages. 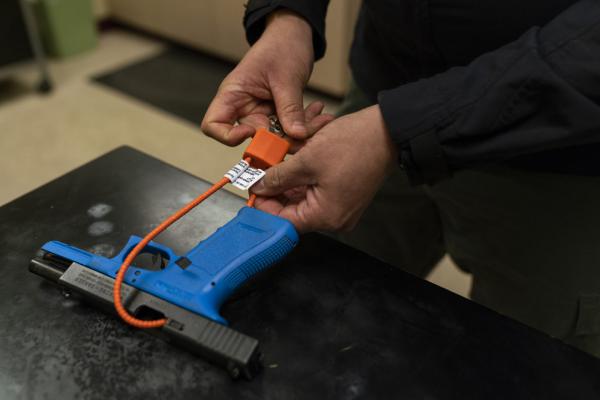 Safe storage and mandatory reporting hit close to home for many Oregon residents. In 2012, a man used a stolen AR-15 to kill two people and injure a third at the Clackamas Town Center, a shopping mall just outside of Portland, Oregon. The rifle wasn't secured in the owner's home and was never reported stolen.

"You know nobody prepares for a moment like that," said Paul Kemp, remembering that afternoon.

His sister had been at the mall visiting her husband with their daughter.

"They had just left and then the shooting started and she couldn't get a hold of Steve," recalled Kemp.

Kemp's brother-in-law, Steve Forsythe, was one of the two people killed that day.

Kemp is now lobbying for Smith Warner's safe storage bill. He said that law could have saved Forsythe's life had it been in place at the time.

Some states, like California, are more strict, requiring owners to keep firearms locked if they live in a home with people prohibited from owning them, like felons. Other state laws are more relaxed. In Ohio, a gun dealer is only required to offer a lock with every purchase.

Twenty-seven states and the District of Columbia have a version of safe storage called a child access prevention law.

Andrew Morral, a senior behavioral scientist at the RAND Corporation, was part of a team of researchers looking at how different kinds of gun laws impact things like homicide and suicide.

"There's variation," said Morral, "but the basic idea is you've got to keep your guns locked if there's any chance of a kid accessing them."

Massachusetts is the only state that requires all guns to be locked when not in use.

And a gun owner there can face up to $15,000 in fines or 12 years in prison for storing a firearm where a child may have access to it.

There are a few states — Utah, Mississippi and Tennessee — where there's no legal requirement to lock up your guns but it's a misdemeanor to recklessly or knowingly provide firearms to a minor.

Rep. Smith Warner's proposed legislation is a hybrid. The requirements are strict but the penalties are not. Like Massachusetts, it requires all firearms to be securely stored, but the penalty is only a fine of no more than $2,000.

Morral said that of the 13 types of gun laws they studied, the child access prevention laws had the greatest impact.

"It does look like safe storage laws can reduce lives lost to suicide and unintentional injury," he added, "and you know that's an endorsement, definitely, for safe storage."

Massachusetts' safe storage law is one law among many contributing to the state's low gun death rate — at 3.6 gun deaths per 100,000 people in 2016, it's the lowest in the country. Massachusetts' death rate is five times lower than the highest rates in Alaska, Alabama and Louisiana where there were over 20 deaths per 100,000 people. And it's three times lower than Oregon's.

But with Democratic supermajorities now holding power in both houses of Oregon's legislature, some here are hoping new laws might reduce those numbers.

They're also hoping Oregonians won't punish them next election for the extra 16 seconds it will take to access their firearms.

KERA is a part of Guns & America, a national reporting collaborative that has 10 public media newsrooms training attention on the role of guns in American life. To learn more about the fellows and follow their reporting, visit gunsandamerica.org. Read full story